Vulture Gifts, and Crying at the Laundromat

The turkey vultures were late this year. I’ve recorded their spring arrival on March 18, or as late as the spring equinox, but it was the 30th and I’d only seen three solitary birds yet. The weather was favorable for them, and prairie burning had begun. Where were the vultures?

I was beginning to worry. Had something happened to them? On other continents, vultures have been greatly stressed due human-introduced toxins. I hadn’t heard of such difficulties in the Americas, but turkey vulture’s range is so extensive, who knows what could happen that I wouldn’t hear about. Did inclement weather delay them?

Maybe because of Saturn retrograde, I’ve been having difficulty moving forward these past couple weeks. We finally got the sewer fixed (blessings on those who work on sewer lines), but it’s still a struggle to move the crap out of the house. I was going to clean things up while Kevin was on a business trip, but . . . I did other things instead, I guess. Still have to take the laundry to Emporia, and I left a big bag at home inadvertently. Clearing, cleansing, completing, the hardest part of life for us, I don’t know why. And it impacts the beginning stages of the next project.

For all these reasons, I was getting pretty worked up about the vultures. What if they were disappearing, like honeybees and monarchs? I need their gifts, desperately: the force of transporting that which has expired to its next incarnation, making room for new life. I got teary at the laundromat, thinking, I don’t know if I can get by without them.

(It didn’t help that, while folding laundry, I stumbled onto this sad Amanda Palmer song.)

I looked for them whenever I went by their roosting spot in Strong City. Yesterday the sun was setting as I took the kids home from Girl Scouts and soccer. It was just the time in the evening when they should be settling down. Where were they? I told the girls they were missing. Rowan said, “Are those vultures?” They were on her side of the car, though, and I couldn’t see them while driving. But they went right over us, low, and yes. “Yes! Two! Three!” And they glided into a nearby tree to join three dozen others already perched, as if they’d been there forever.

The turkey vultures have returned, and the cycle of life expanding, contracting, and rebirthing itself can roll on. Thank you, friends, for coming back. 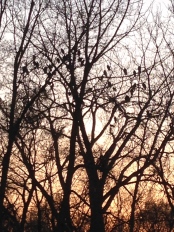 When the Turkey Vultures Fly South For Winter

I didn’t see them leave.

They don’t say good-bye.
One day I see
a roadkilled hawk
alone in death
and notice their absence.

A group of turkey vultures near Burns, Kansas

In mid-March I was in Hot Springs, Arkansas briefly, and I saw the first vultures of the year. I pulled off a busy highway to get a look, and they were lazily circling like any turkey vulture would on an ordinary day, though their overall concentration seemed a bit high. But it was late in the day, the typical time for turkey vultures to settle down to roost, and they often converge in favorable places. I concluded that they weren’t just arriving in northern Arkansas, but had arrived there before I did. By the time I got home, they were here too.

But today I took a drive down from Strong City to El Dorado. (Dorado rhymes with tornado, for you non-Kansans.) Just south of Burns I saw a kettle of vultures, and being the Cathartophile that I am, I stopped for pictures;  as I was shooting, another kettle soared on over my head, like the previous one, circling to the north. In the photo above, I count around eighty. That looks like migration behavior, not daily scavenging. It’s three weeks later than I first saw them; however, some vultures migrate thousands of miles, through the Central American isthmus and into South America. We can excuse some of them for being a little late coming back this way.

It was a perfect day for soaring. Looking to the south for any more, I saw a line of billowing clouds on the horizon. Vultures are inefficient at flying, but masters at soaring. A weather front creates ideal updrafts for them to ride.

Turkey vulture has long been important to me, and to see so many in their element thrills me beyond words. Whenever I feel a deep affinity with another creature, I look to its symbolism for messages it might have for me. Ted Andrews says much about vultures. He emphasizes the  importance of action over appearance or words. This is accompanied by an ability to use higher vision to access natural forces. Much can be accomplished with minimal effort. Vulture symbolizes death/rebirth and purification, though it may take three months for the process to be completed. “It [is] a promise that the suffering of the immediate [is] temporary and necessary for a higher purpose [is] at work, even if not understood at the time.”

How it feels before a storm.
The wind is vigorous, the air not bright,
but charged, fragrant with the absence
of impurity. Something is blowing in,
might be just rain and lightning and thunder,
sky exercising its massive power,
then again it could be something
else altogether, something that could
grab you by the solar plexus and shock you
into becoming a new kind of being.

On a day like this you might see
the first vultures of the year,
surfing the wind with their whole bodies.
Surely if they had teeth you’d see them grin,
feeling the air caress the skin between the feathers,
the lift under the wings.
I saw two, then three more,
today, March 18, 2012,
and my heart skipped a beat.
Namaste, I said out loud.
Welcome back, friends.