And Yet More Prairie Burning. This Time At Night.

I talked a little about the ecology of controlled burns on the prairie, and posted some photos, and thought I might be done with burning for this year. (Though it’s possible the fire bug has bitten me, and I will be out doing this every spring, as long as I live in the Flint Hills.) But late yesterday afternoon as I sat at the computer, I could see through the window smoke billowing up from behind the fairgrounds across the highway. As twilight set in, I was preparing dinner, and just as I was setting it on the table, Kevin came in and told us all to go outside and look. We could see ribbons of flames stretching across the hills, too close not to go have a look. I quickly took the food off the table so the cat wouldn’t get into it, then loaded the kids into the car.

My magic device from the future isn’t really equipped to take night photos, but it does surprisingly well, considering that the first camera I owned would have required special film (measured in inches), and manually twisting some dials to get anything at all, and then you’d have to take the film into a special little room and dip it in stinky chemicals in total darkness. It sounds like some kind of joke, doesn’t it?

But here we are, and this is what I can get. The focus isn’t good when the light is poor, but I won’t complain if you won’t.

And a note to the kids’ teachers: Sorry if they’re tired today, some life experiences are more important than school.

We’ll be like a roaring prairie fire, clearing out the dead stuff to make way for spring!

I was getting the kids ready for school, so I opened the door and poked my head out to check the weather. I was greeted by the most stunning sky I’d seen in –well, we get a lot of stunning skies here, so I guess it’s been nearly a week since we saw that moon halo. Nonetheless, to see such beauty in the western horizon at dawn is a delight that knocks on the door of the still-sleepy heart.

Sky photography is not my gift, and for years I wouldn’t even try; but the magic camera from the future goads me to attempt the impossible. Occasionally I get a little bit lucky. 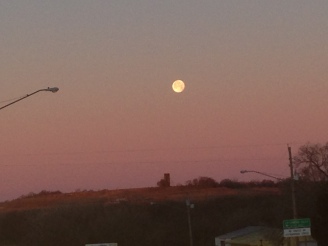 Autumn Hiking In the Flint Hills

We’re having an unusually early and very deep cold snap, but last week capped a lovely autumn. At the end of the kids’ Thanksgiving vacation, we went for a prairie walk with their grandma (“Baba”) at Tallgrass Prairie National Preserve. Right away Kiran insisted she’d had enough of being with me and her sister over the previous five days, so I was free to walk ahead, listen to the quiet, and take photographic advantage of the prairie and the angle of the sun to the hills. The writer in me thinks I should tell a story, but all I seem to find are expansive horizons, light on grasses, dormant prairie flora in intimate contrast to distant, vibrant children. Reflections on a creek, more vivid than the tiny living fish hiding below the surface. It’s a story for pictures, not words. 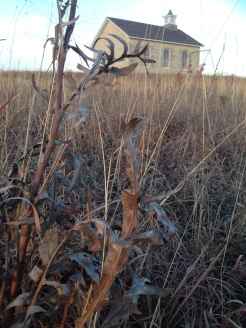 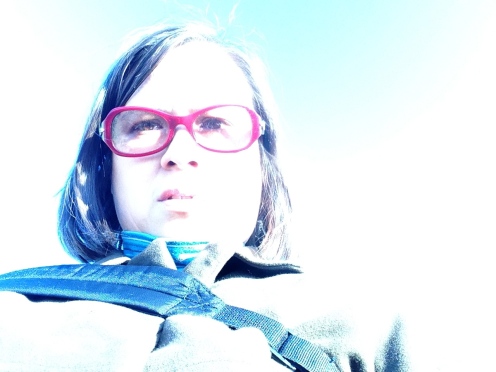 Who is that strange person in the picture?

Ah, the exquisite detail you can capture with the iPhone. Notice the light reflecting off every hair, the way the whiskers seem to radiate from out of his shadow. The phone, however, will not pose the animal for you. 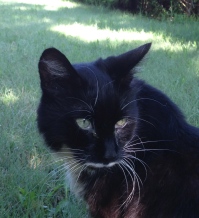 Of course he is much more beautiful in “person” than any photograph can convey.

Well, I don’t have much to say today, but am close to a personal goal in page views. Maybe some cat pictures will boost the numbers just enough. Toulouse was out in the grass on this lovely summer morning; what better place and time for a photo shoot?

A dozen shots later, here is what I have. A stunningly detailed shot of his back, and a decent shot of his face. (It would help if he could hear me clicking and singing his name, and look at me, but, alas, at his ripe age of seventeen years, his hearing is impaired.) I have half a mind to take him back out and keep trying until I get more good ones, but I’m swamped with other tasks today, so we’ll all have to be satisfied with this.

Thanks to all my readers, who make blogging fun.

What’s the most beautiful thing you’ve seen today? I cut the leaves off this red cabbage to make some cole slaw for the obligatory July 4th picnic tonight, and this intricate fractal loveliness is what I saw.

Whenever I have a red cabbage I remember once seeing my Mom cut one open and saying, “Isn’t that pretty? Sometime I’d like to draw a cabbage.” I don’t know that she ever did. That was before people had computers in their houses, much less pocket telephones with cameras built in. Fortunately we do have those now, as I did not inherit her exceptional ability to draw. Even if I had, it might not have been fast enough; by the time I’d finished making the slaw today, the core was beginning to yellow at the edges, its vitality dissipating. Now I have the magical phone camera, I can hope to capture some of the fleeting beauty that surrounds us every moment, whether we notice or not.

Happy Independence day, everyone. Let us all enjoy and appreciate the place we are right now, and remember to notice something beautiful. 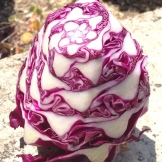