When the taxes hadn’t been paid
—or filed, and the accountant called
from Topeka to ask why, I didn’t tell her
about the long months after the baby
when death was my greatest longing
and deepest fear. I didn’t tell her that
when you run a motel, it’s never a question
of whether there is a leak, or a clog, but
of which room. Rooms. I didn’t tell her
how I’d come to dread the ring of the phone,
how I jumped at the sound of the
doorbell. What’s wrong now? I didn’t
tell her about the words —trapped, helpless,
powerless— that had come to be like
fat lazy friends who crowded me
on the couch with the baby. Or that
my marriage had changed in ways that
I didn’t understand, that I couldn’t trust
my perceptions, that her understanding
of causality probably wasn’t relevant to
the question she was asking.
I’d met that slender woman before,
in person, seen how she looked at me, with her
coif and pantsuit and briefcase that
matched her shoes. I in cutoffs with
a toddler on my hip and a failing
business and a debt I could not pay.
I didn’t tell her that I’d had a good education
from a respectable liberal arts college,
could’ve done anything, and I chose this.
This was what I chose.
I told her that my husband had a job
elsewhere now and that there was more
work than could be done in the hours
available, which answer did not satisfy.

She had a girly first name but her
last name rhymed with penis,
and I did not mention that, either. 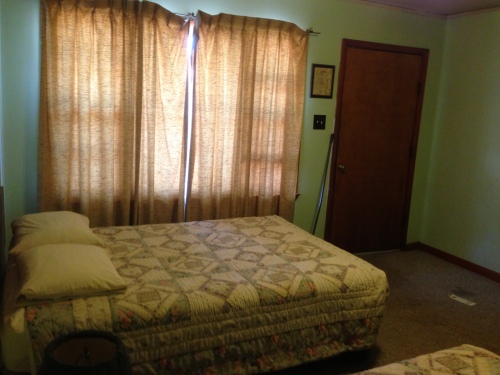 I often dream of motel rooms.